At the Zambian side of the border near Chipata we were about to drive off when a traffic official pulled up alongside and asked if we had obtained our municipal road tax. We’re still not sure whether this is a legitimate tax. This is in addition to the road tax all foreign registered vehicles have to pay and has nothing to do with your Carnet either.

We detoured the 130kms from Chipata to the South Luangwa GR, one of our favourites. Our first night was spent at the Croc Valley campsite outside of the reserve on the bank of the Luangwa river. We’d never seen the river so high and we were told it had been at least a metre higher!  So peaceful to be back, except you had to be alert to avoid been harassed by monkeys.

We visited Tribal Africa again. Their showroom is so beautifully put together. Besides the fabric and smalls which they handpaint and manufacture on the premises, there’s a small curioshop. Even goods from South Africa are on display, especially the Kapula candles and pottery range from Bredasdorp.

Solveig bought a few chitengas from the stalls in the village nearby before we moved to Wildlife Camp, our favourite.

We’re not sure why we always still return to Croc Valley, but I guess it was the first camp we chose many years before….
The sand bars usually covering a large part of the river were now submerged and only a narrow part close to the bank was exposed.

We watched a Yellow Billed Stork in the shallows endlessly searching beneath the surface for food and could have stayed there forever. You become so relaxed and at one with nature in a place like this.

Our next stop at Bridge Camp, also on the Luangwa river halfway to Lusaka, was not as relaxing. Since we were last there the wife of thè owner had died from emphysema.  It is understandable that the camp now needed lots of TLC. although the quirky ablutions were still the same and gave us plenty of hot water.
We met two young couples who were both travelling by bike!

and Australians from Melbourne on mountain bikes.

We returned to Lusaka, stayed with Kate and Ginty and had the car serviced with Dan once again. 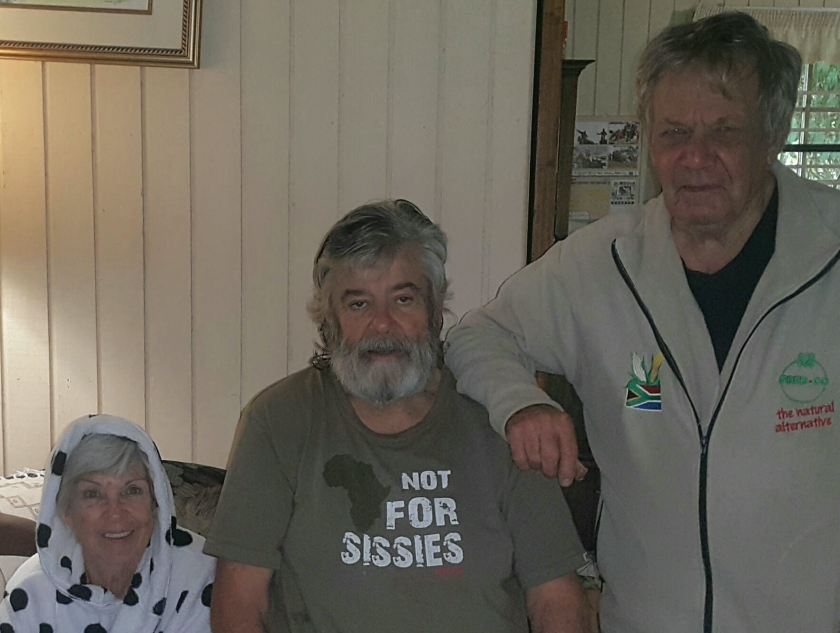 Ginty was very busy at work so we never stayed long.

We had heard of an alternate route from Lusaka to Sesheke via the Kafue game reserve which would avoid the bad sections of road between Lusaka and Mazabuka and Livingston to Sesheke. Ginty confirmed that it was good tar all the way.

We decided to take this route, new to us, even though it would add about 230 kms to the distance.  We looked forward to the Kafue game reserve and also the new tar road from Mongu to Sesheke following the Zambezi southwards.

In the reserve we stayed at a private lodge and campsite, Kasabushi, on the bank of the Kafue river. In paradise once again!

The young British owners, Andy and Libby Wilson, joined us at our braai in the evening. They had created such a special place and also had a number of chalets a, each with its own private river frontage.

There are so many amazing places to experience in Africa we feel it’s not necessary to travel anywhere else.

In Mongu the most beautiful sight awaited us. The Zambezi was spread out for miles across, with countless islands. Part of the Barotse plains, and the fact that the Zambezi was so full it had burst it’s banks.

Our last night in Zambia was spent camping at Ngonya Lodge and Campsite. It’s located imediately after crossing the Zambezi on the brand new bridge near to Sioma and the Ngonya falls. The new bridge has replaced the ferry service which previously transported traffic across the river.

The Ngonya Lodge is beautifully situated overlooking the Zambezi.  The road from Senanga to Sioma and the Ngonye falls was so new it was not on Tracks 4 Africa. Another bonus for using this route was the absence of trucks. Definately a route to consider. Especially if you are also visiting the Luiwa and the Barotse plains too.

We made our border crossing into the Zambezi region in the Caprivi really early and decided to continue on our journey instead of our usual stay in Katimo Mulilo….