We had almost two weeks until our ferry to Panama. The next day we set off towards the most northern part of South America and the Caribe as it is named.
We soon arrived in Barranquilla. Unknown to us the annual Carnaval was about to take place. Its a week long festival held 40 days before easter each year.  Preparations were being made and many streets were closed off for the parades and stalls. The entire town was fully booked out. Everybody in a festive mood. There was nowhere for us to stay or even park. Not wanting to stay until the weekend carried on up  the coast.
The road from Barranquilla to Santa Marta passes salt pans, mangroves and small villages with houses built on stilts.

The road is actually built on a sand spit and skirts the Cienaga de Santa Marta, a lagoon teeming with waterbirds.

We spent the night in a hotel in the area before continuing to a small town on the coast named Palamino.

The area was close to the Northern most point in South America, with long beaches fringed with coconut palms. 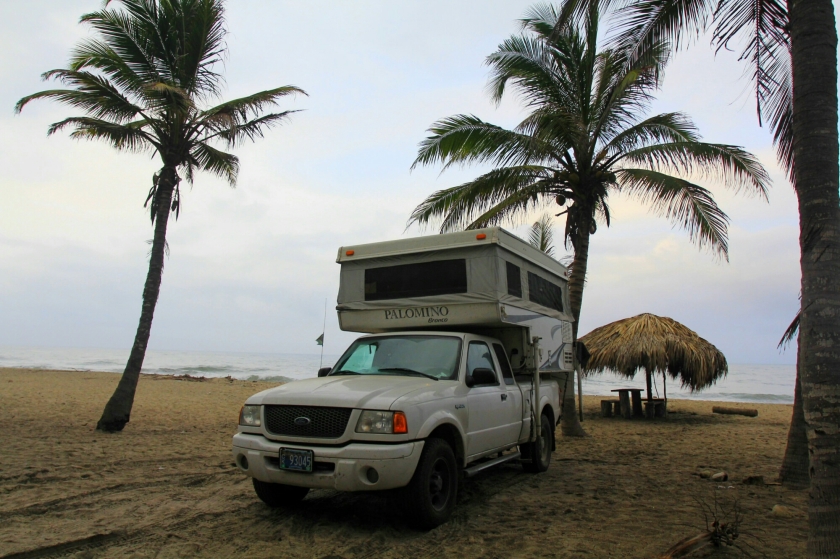 We camped at a campsite for a change and enjoyed the warm Atlantic and the luxury of decent ablutions.
We could have stayed here for much
longer it was so relaxing but we needed to get the car serviced in Cartagena.  On our return we stopped at Santa Marta to replenish our provisions.

The Ford dealership was excellent and we also had a few other things to be seen to besides the oil change.
After the service we tried to get a refill of propane as ours was running low. Not a chance! Colombia used the same cylinder as in SA and couldn’t refill either our Argentinian nor Chilean cylinders. We were informed that  Panama used the same cylinder as Chile so it would have to wait.

There were a few days left before we departed so we had time to explore Cartagena’s walled old town. What a treat! 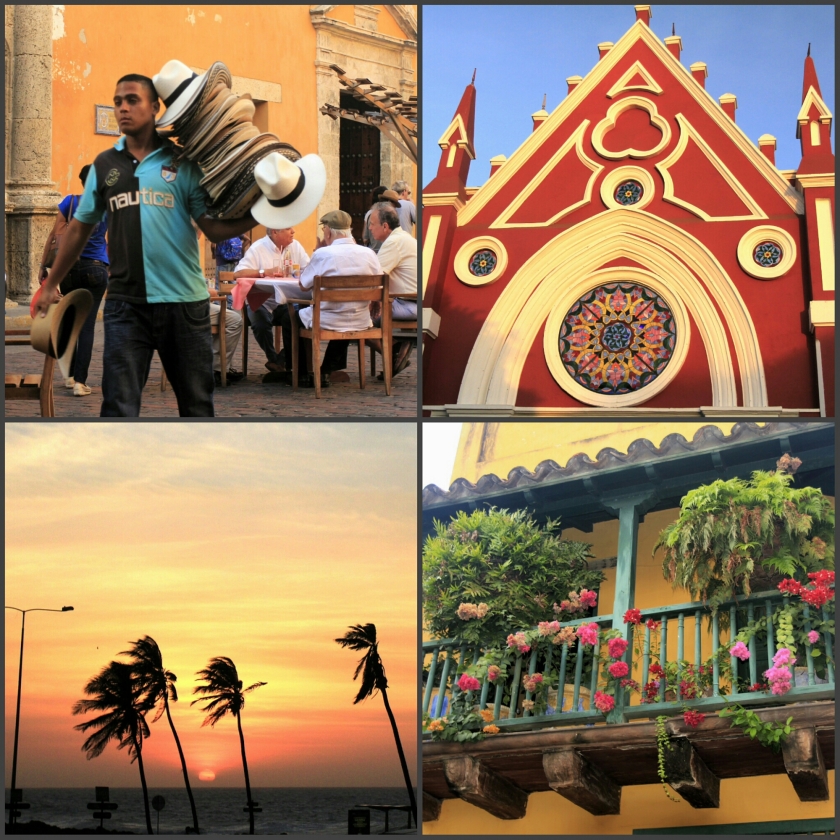 Beautifully maintained old buildings,  many of them restored into boutique hotels or restaurants.

And lots of street cafes 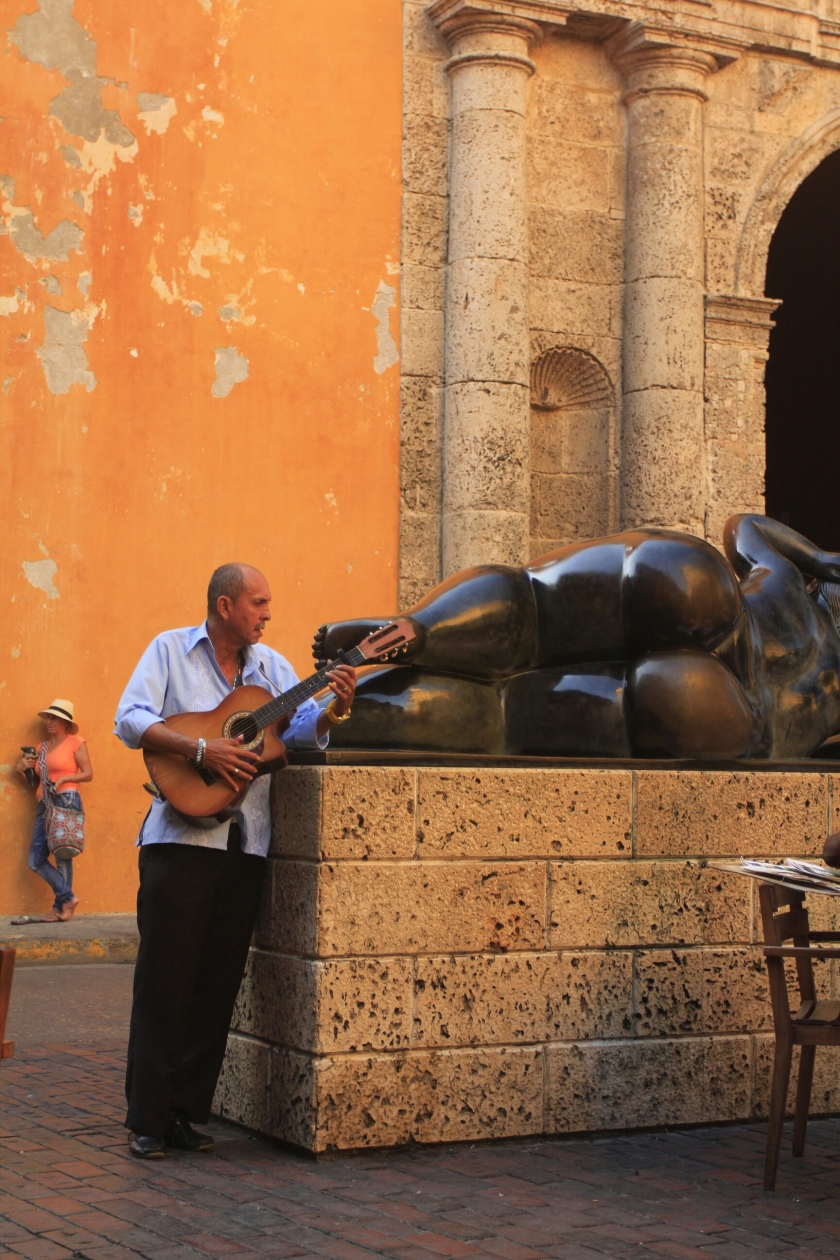 The streets were full of local crafts being sold on the pavements.

The wall itself was special. You could walk on it with a view of the old town and the modern city of Bocagrande      with its high rise hotel buildings.

When we’d been to Bocagrande to book our ferry crossing at the travel agent we’d been impressed by area and returned there to explore. It was suituated on a long spit of sand crammed with restaurants, coffee shops, shopping centres, office blocks and hotels and a lovely long beach.  The peninsula formed the bay in which  yatch basins and the busy port were situated.
There we found a coffee shop, Juan Valdes,  which served the best Colombian coffee and pastries and had a good free wifi connection. We spent many hours there over the next few days and got chatting to other patrons who seemed to be regulars.  This is where we met Jane Chaplin. Solveig had admired her handcrafted colourful bag and asked where she had bought it. We’d seen similar bags to these all over Colombia, but not as lovely as this one. She insisted that Solveig accepted it as a gift and wouldn’t take no as an answer.
We were told that we could camp for free at La Guito, a small lake at the end of Bocagrande. It was next to the Hilton Hotel.

We felt safe there too as it was regularly patrolled by police. You might wonder why we are always wild camping.  It’s due to the lack of formal campsites generally in Colombia.
We went to Baru hoping to camp on the peninsula but our hopes were dashed by the unusually high spring tides cutting off the campsite from the rest of the peninsula.

While there we visited Playa Blanca but there was only tent camping on the beach which couldn’t he reached by the van.

We enjoyed most of the day there in paradise again!!!
We had to return to La Guito to camp for the last night before leaving Cartegena and met the Belgians there who were also making the ferry trip with us…….

3 thoughts on “Cartagena and the north”