The region north of Santiago is known as the Atacama Chico which literally means the Small Atacama, not quite true desert yet but more like Namaqualand in summer. We left Santiago late so stayed overnight in a truck stop again. They’re really so convenient, always clean, have hot showers, often better than “real” campsites. We were heading for the coast again but were also trying to put some distance behind us.
The 29th of December we managed to cover a great distance on the Pan American Highway, Ruta 5, which is dual carriageway most of the way through Chile. It will be interesting to see how much we’ve spent on tolls by the time we exit Chile. The quality of the road, the ease of which one is able to cover great distances – considering the number of trucks, the safety features and roadside facilities make it all worthwhile.
Much of this section of highway was on the coast, which became more and more arid the further north we progressed. We were left breathless at times by the shear beauty of the coastline. No photograph could share the feeling it invoked.

The distances just melted away and before we were aware, it was heading towards night again. We’d passed by so many small bays and beautiful beaches we could have stayed at, but suddenly found ourselves in La Serena.

All the activity took place near to the Plaza in the centre of the town.

With nowhere to camp, it was the Copec petrol stop again! Most of them have extremely clean toilets and hot showers too,  a fast food restaurant, ice – for our drinks at night, good coffee and sometimes free wifi too.

The 30th took us inland again after we’d stopped to make ourselves coffee at Los Hornos, a small fishing village.

We missed the amazing coastline. The desert was becoming dry and harsh, similar to the area around Ai-ais in Namibia. We were approaching the Atacama Grande. Mountains of bare, weathered rock lined the highway. The day was very hot with a strong desert wind blowing from the side, making driving more difficult.  We came upon this geological feature of volcanic rock.

Of course it had been turned into a shrine!

I was thankful when the road eventually turned towards the coast again, where it was cooler, almost cold actually, brought on by the cold Humboldt ocean current. We camped at a “proper” campsite for R200 at Roca Negra in Bahia Inglesa which didn’t come up to the standard of either of the two previous nights.
We choose to keep to the coastal route, Ruta 1, for a change as we enjoyed the coast more than inland, stopping at the small fishing villages dotted all along the coast. In Caldera there was even a fish market where I enjoyed a Fruta del Mares. Black and white muscles, oysters, crab and fish served in a pickle juice with coriander and lemon. 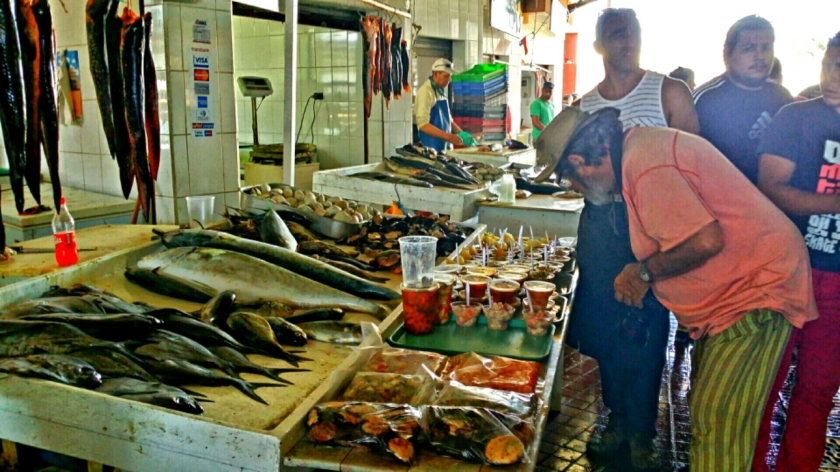 Deliciously tasty and fresh from the sea.

Solveig waited outside taking photos of boats, pelicans, gulls and seals. For those that don’t know, Solveig grew up eating fish for nearly every meal and was turned off for life!

We continued further up the coast looking for a suitable place we could wild camp for New Years Eve. We found a place where we could pull off the highway and take a dirt road down to a point with a small bay at Balneario Flamenco near Chañaral.

May your new year also be as special and peaceful as the beginning of ours! The words of the song ” What a wonderful World” come to mind.

Along the coast we often came across small villages with colourful houses.

At Chañaral we turned inland. A long climb of over 1200 metres the next 100 km. Fortunately we had a tail wind helping Michelle along. The desert landscape is so much of the same when away from the coast so after about 200 kms we took a turn off to Taltal.

Not a pretty town unfortunately, very industrialised with a large port to export minerals mined in the desert. Had lunch at a restaurant on the pavement. Ian had fish. Very tasty and fresh, but unattractively served, six pieces of fish on some lettuce leaves. The cost….about R200
We carried on to Antofagasta…. to the start of the Atacama Grande.

2 thoughts on “Chile, The Atacama Chico”