We’ve made the transition from the beautiful green grasslands of the Kalahari  into the harshness of the Namib during the past week to find a new beauty.

The incredible silence surrounding one is overwhelming. The lack or absence of vegetation makes one so much more aware of the earth and its variety of surfaces. The rocks, the sands, the stones and the colours!

In the Erongo region at the Spitzkoppe we found semi precious stones all around us on the ground and at night the sky reaching down and touching us like jewels.

The dream community run campsite at Spitzkoppe has 12 private sites, each nestled between the huge ochre boulders.  There’s no electricity nor water, only a long drop toilet at each site.  Showers and flush toilets are at the park entrance a few kilometers away.

Afterwards we spent two nights in our favourite Namibian town, Swakopmund. We camped at Alte Brugge.  A lovely venue with grassed stands and private ablutions with kitchen area.
From our base in Swakopmund we were able to explore the whole area, including a visit to the Walvis Bay lagoon.

We tried to locate the bird sanctuary at the waste water disposal  but it was closed. Fortunately bird life on the lagoon is incredible.

We had a special mission while in this area. Solveig will tell you more…

Goanikontes is an oasis in the Namib. Hopefully this won’t be boring and if it is,”sorry”. Little bit of personal history…..My father was a whaler in the Antarctic and was returning home to Norway when the 2nd World War broke  out, so he was stuck in Cape Town for the duration (shame!!).
He was already married to my Mom so they were apart for 7 years. When the war was over, he did not want to return to Norway (no work there) and I guess he loved CT.  He persuaded my Mom to join him.
One very brave lady – coming to a man she had not seen in 7 years, to a hot, black country and no family!!!!!. She actually blows me away now in retrospect.
While I was dating Ian – going back 48 years – he was looking through my folks photo album and looks at a pic from SWA and says to my Mom -Goanikontes? ??!!!!!. She was blown away, she did not think anyone would know of that place.  Anyway, it turns out my Mom landed in Walvis Bay and met my Dad there. They spent time in Goanikontes – was I conceived there????  So with these thoughts, going to Goanikontes was very special.

It is a little oasis about 45 kms out of Swakopmund.  We drove there in the dry Swakop river bed and passed quite a few typically German type desert getaways on the banks. 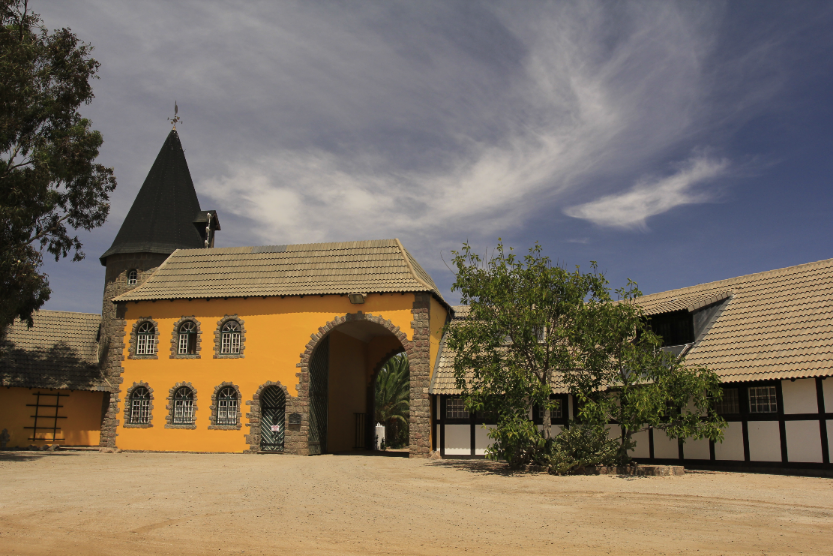 It was beautiful to drive through the desert and then to arrive at a place that is so green!! Unfortunately they seem to have cut down all the palm trees, but there are lots of other trees. Goanikontes is also the place near to the “Mountains of the Moon” – an absolutely splendid magnificent sight of rock mountains and sandy undulating flats.

We had a good night on our own at the camp in Goanikontes! !!OK so that’s my special story…….

Now for some ideas for ardent campers and travellers —Ideas to make life a little easier in the wild :
Hang your water bottles in bags in front of the Aircon to keep cool. Make the bag from plastic recycled orange bags??
Take lots  of hooks with you.

Buy water in rectangular plastic containers (5 ltrs) and when empty cut off top and use them as storage organiser, divider in your crates e.g all liquor bottles, all sauces and condiments and one for veggies.

Bought a special mosquito repellent that one sprays on fabrics – clothing, bedding and car interior. Got it at the Getaway show last year. The product is VITAL Protection AM2 . Distributed by HHL Technology, a Gordon’s Bay company! It really works well. The insects actually hover around outside of the car! It is claimed to last for 3 months or up to 30 washes!!!

OK last idea –  because of space constriction could not take deep salad bowl . So how do I mix a salad??

Salad mixer and salad
I received a magic triangular plastic container with a lid from Stella. Chopped all salad stuff into that, poured on olive oil, balsamic vinegar,  honey – put lid on and shook it all and voila – magic salad. No deep bowl needed!!! Wow being out like this and living with only the bare necessities makes you creative – thinking out of the box, Boer maak ‘n plan!!!!!

After Goanikontes we returned to Swakopmund to restock our supplies before heading off to Henties Bay. On the way we came across this amazing place Wlotzkasbaken, the town has no water or electricity. Each resident must supply their own.

Henties wasn’t great, but the fact that there was a mighty thunderstorm didn’t help things. The saving grace was separate private ablutions again.

The next morning we set off to the Brandberg area. A very long straight road to Uis with very sparce vegetation.

Further from the sea the vegetation improved slightly. The straight road had the occasional table and chairs at a roadside resting place.

We passed a few donkey carts..

and a number of “Graft Markets” selling crafts made by the rural local population.

And these Himbas selling their bangles

We reached Khorixas where we stayed the night just before another thunderstorm. This one was extremely heavy with lightning striking in our camp!
The camp is run by NWR and is well appointed with shady, grassed sites with braai, table and chairs, electricity and tap.
I’m finding it extremely difficult to get the blog completed because of difficult network connections so please be patient between blogs.

4 thoughts on “The Namib”